To Ditch the Screen, Los Angeles Schoolchildren Escape to the Great Outdoors for In-Person Science

April 2, 2021 / News / Comments Off on To Ditch the Screen, Los Angeles Schoolchildren Escape to the Great Outdoors for In-Person Science 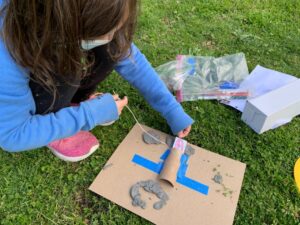 An LAUSD first grader begins construction of her ecosystem model that will allow a paper salamander to safely cross the road. She used a cut-in-half toilet roll to make a tunnel for the salamander to cross safely from the river habitat to the forest habitat, both constructed out of plasticine. (Deepa Fernandes/The California Report)

It’s an experience most children have not had in a year.

Eleven sets of eager eyes are fixed on the teacher who holds court in the center of the circle, storybook in hand and props at the ready. Each child has a ziplock bag packed with supplies: duct tape, plasticine, pipe cleaners, scissors, string and more. The children are about to build a river and forest ecosystem model. And there’s a tricky catch — they can’t let their paper salamander perish. Their excitement is palpable.

These Los Angeles Unified School District first to fifth graders are spaced 6 feet apart on the grass of an L.A. city park. Some kids sit, some crouch and one little boy spins about in place. The children have left behind their computers in the Parks and Rec building, where they’ve spent the morning doing virtual instruction with their classroom teachers. Now they are participating in a program run by the district’s Office of Outdoor and Environmental Education. The little students seem thrilled to be discussing salamanders.

“We’re covering ecosystems,” said Ashley Storey, one of the program’s outdoor educators. The students “have to come up with a way for a salamander to cross between its two habitats, a river-dwelling and a forest-dwelling, without getting hit by a car.”

Hands-on learning like this has been all but impossible during the pandemic, and despite herculean efforts by teachers to adapt their curriculums for Zoom, virtual education hasn’t worked for many children. “We know that learning loss is real during this pandemic,” said Gerry Salazar, who runs outdoor education for the district. A national study found the educational slide has been widespread as children log in to school from home. Zoom school just isn’t providing what all kids need, and children of color are falling further behind their white peers. It is hoped that the return to in-person schooling will help children catch up, yet even in hybrid learning, most students will still be zooming with their teachers for some portion of the day. The problem is acute for the youngest students because hands-on learning has been almost impossible in the virtual environment.

Salazar and his team wanted a program where science learning fun could travel to the kids. The idea was to bring the mountains and forests to where the students were, and not via a computer screen. The Skyhook Eco Van program is where Los Angeles kids from across the district do exactly that.

Salazar managed to acquire four sleek black vans — a donation from the Skyhook Foundation — and his team of outdoor educators equipped each one with plastic tubs full of science learning materials.

Getting kids outside to learn is at the heart of everything Salazar does. “We know that the outdoors are therapeutic for all of these kids,” Salazar said. During the stay-home periods, he didn’t want students to lose access to nature altogether.

‘I’ve always felt that the outdoors is a bit of a human equalizer … [Nature] provides opportunities for children to be able to lower their anxiety, to lower their stress levels.’Gerry Salazar, LAUSD

It’s a program that relied on donations to be realized. Salazar would like to see it grow but knows the funding realities might not allow this long term. “We are mindful that ongoing costs may not have the future funding, post CARES Act, necessary to operate.”

While the one-time cost of the vans was covered by philanthropists, including Kareem Abdul-Jabbar, the district has to cover the staffing and gas costs. “The current fleet of four may be sufficient when considering the entirety of outdoor and environmental education programs offered,” Salazar said.

This salamander lesson at Baldwin Hills’ Jim Gilliam Park is the second time the Eco Van has come to work with this group of children, all made possible due to LAUSD’s partnership with the city’s Department of Recreation and Parks where students come daily to utilize the Wi-Fi and child care.

The children look eagerly at one outdoor educator, who they call Ms. Willow, as she peppers them with questions. “What is a salamander? Has anybody ever seen a salamander?” There are some guesses, some giggles and then a first grader responds correctly. “It is definitely a lizard.”

This little boy is wiggling about, raking his fingers back and forth through the grass around him.

He is eager to open his ziplock and get to work. “I’m going to build a house that protects the salamander from the wind,” he said.

Storey said they tweaked the usual lessons they would give the kids to reflect that in the mountains, they’d really encounter animals. “Salamanders are small,” she said. “They are important to the ecosystem.” For the park lesson, children get a paper salamander. Step one? Color it in. It’s a task the children gleefully attack.

Being outdoors to learn is more than just nice, said Salazar. “I’ve always felt that the outdoors is a bit of a human equalizer.” Nature “provides opportunities for children to be able to lower their anxiety, to lower their stress levels,” Salazar said.

He predicts other long-term benefits as well. “They may look to these open spaces like these neighborhood parks to seek out their own wellness and it [may] empower them to be responsible for their own general health.”

The learning benefits are tangible, said Ashley Storey. “First graders are jumping ahead as they are grasping onto concepts that probably wouldn’t even come to them until later grades [like] third, fourth grade.”

This stands in contrast to data analyzed late last year by McKinsey & Company that found by the end of the fall, students had only learned 67% of the math compared to same-age peers the previous fall. That equated to about three months of learning loss, according to researchers. For schools with predominantly children of color, that math level fell to 59% of what was learned in the same period the year before. There was a learning loss in reading ability of up to two months.

Learning about ecosystems is clearly more engaging when taught as an engineering project. The tactile nature of all these lessons makes learning, especially for very young children, a much more meaningful experience.

Other lessons contained in large plastic tubs in the back of the Eco Van include a “skull lab.” Storey said, “Students get a replica skull of different animals and they have to try to figure out which animal the skull belonged to” by measuring it, looking at the kind of teeth it has, and asking questions to narrow down an answer. 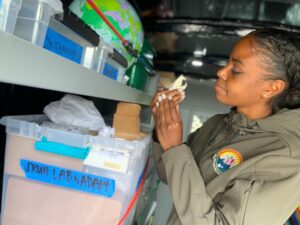 LAUSD outdoor educator Ashley Storey holds a replica skull of a small squirrel. She stands inside the back of the Eco Van, which takes STEM education to children in parks across Los Angeles. (Deepa Fernandes/The California Report)

In all the activities the outdoor educators do with students, Salazar said many STEM standards are checked off, and the same activity can be made more sophisticated for higher grades, or simplified for kindergarteners.

That’s a goal that used to be met when students came up to Camp Skyhook and spent days learning outside. But during this year-plus of distance learning, that hasn’t been possible, so the Eco Vans have filled in some of that gap. And they will continue to operate for the rest of this school year, pulling up to parks and school campuses where children are learning.

Beyond this school year, however, like much of the education world, Salazar doesn’t know what the future holds.

For now, at least, this handful of children is learning in the great outdoors. When their Zoom school day finished and the Eco Van arrived, the kids started with the building blocks of their lessons: cardboard, duct tape, plasticine, pipe cleaners and toilet rolls. But in this bucolic outdoor classroom in the park, students have mixed those materials into a diorama of a forest, with duct tape as the busy road the salamander has to cross. The perfect salamander crossing.

These children-built ecosystem models allowed paper salamanders to cross the road, safely, under a real beaming sun, surrounded by the little smiling student engineers. Mission accomplished for Storey and her team.

Deepa Fernandes is a reporting fellow at Pacific Oaks College, which is funded in part by First 5 LA.